Thank you to everyone who donated to our kick starter.

Organizers of the second annual Northern Appalachian Folk Festival are part of the way toward their fundraising goal of $20,000.

Sean Howard, director of Downtown Indiana, said individuals may donate to the cause through the fundraising website Kickstarter. For those who are not familiar with it, folk festival organizers have scheduled a Kickstarter awareness and fundraising event June 12 from 6 to 8 p.m. at Spaghetti Benders in Indiana. Tips for the guest bartenders — Elroy Face, a former pitcher for the Pittsburgh Pirates; borough councilman Gerald Smith; and Howard — go to the Kickstarter campaign, which aims to raise $5,000.

The event will include the first official announcement of live music, workshops, artisans and vendors.

This year’s event is set for Sept. 4, 5 and 6. (Thursday night will be an event at the Theater with 1 act plays and music to kick off the weekend)

This year’s festival will have another great lineup of musical performers from the region, a series of engaging workshops, and street full of talented artists and artisans!
Not to mention there’s a fantastic area dedicated to children’s activities!
It takes a lot of things to throw a successful cultural event. Staging, lighting, Sound, seating, security, port-a-pottys, and then you need musicians, fun, family-friendly activities, promotional materials, and lots MORE. Most of all we need contributing support.
We’ve set our online contribution campaign known as Kickstarter goal to $5,000 to help pay for all of these integral pieces of the Folk Fest. Your donation today will help make Indiana, Pennsylvania an even more culturally vibrant place! Please come and contribute toward this important positive university and community event to occurs for a second year.
The festival will be featuring a Thursday night local theater and musician event at the Indiana Theater.

The Northern Appalachian Folk Festival is an annual, free, event. It is organized by a volunteer steering committee that s dedicated to bring good music, food, and entertainment to Downtown Indiana. This process cannot succeed without generous contributions. Please see below on how you can support! 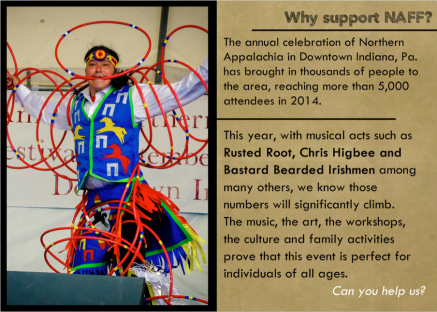 This is when we all pitch in to make it happen.  Give today to help create another wonderful weekend of Northern Appalachian Folk Fest for September 2014.

Festivities began Thursday night at the Indiana Theater with a 7 p.m. performance by folk and bluegrass musician Gordon Glen. At 7:30 p.m., nationally recognized musician and activist Sue Massek is to take the stage for a one-woman musical titled “Precious Memories.

Don’t forget to check out the whole weekends line-up of music, food, and workshops – from bee-keeping to social justice – we start with the Puppet Parade from the Artists Hand on Friday.

When people think of Appalachia, it’s often regions of Kentucky, West Virginia and Tennessee that come to mind.

But Pennsylvania, southern New York and eastern Ohio are just as much a part of Appalachia, rich with their own history and cultural traditions. It’s that history and those traditions that IUP’s Jim Dougherty and others are hoping to showcase through the inaugural Northern Appalachian Folk Festival, to be held later this week in downtown Indiana.

The festival, led by a committee of more than a dozen people, is to feature a mix of music, theater, art and educational workshops.

The point, Dougherty said, is to celebrate the region’s culture, its history and the significant contributions it’s made to the country. And there are many, he said.

The area represented the frontier for a young America. The natural resources harvested here, things like timber, coal and natural gas, helped to fuel its growth. Also, it played important roles in the rise of the labor movement. And it can claim connections to the beginning of the modern-day environmental movement, he said.

Dougherty said the festival is an outgrowth of the Appalachian Studies Association’s annual academic conference, which was held at IUP in 2012, the first time the conference took place somewhere north of the Mason-Dixon Line, Dougherty said.

In holding the conference here, the association opened up a new market for itself and allowed IUP faculty and the university’s own Center for Northern Appalachian Studies, of which Dougherty is the director, to forge new connections with people and groups interested in Appalachia studies. So to maintain those connections and to foster new ones, Dougherty and others decided to organize the folk festival.

Dougherty said he hasn’t had difficulty in selling the idea to the community. Many are embracing it, including the Indiana Arts Council, which is keen on having a successor to the former New Growth Arts Festival, he said.

Festivities begin Thursday evening at the Indiana Theater with a 7 p.m. performance by folk and bluegrass musician Gordon Glen. At 7:30 p.m., nationally recognized musician and activist Sue Massek is to take the stage for a one-woman musical titled “Precious Memories.”

The musical, written by another folk festival headliner, Si Kahn, tells the story of Sarah Ogan Gunning, who wrote songs about the coal fields of eastern Kentucky in the 1930s.

The performance is free, but organizers have suggested a $5 donation.

On Friday, activities opened with a 5 p.m. puppet parade from The Artists Hand Gallery along Philadelphia Street to the festival’s outdoor stage at Sixth and Philadelphia streets. The puppets, which are being put together this weekend under the direction of Brian Jones, the gallery’s general partner, are meant to embody aspects of folk and Appalachia.

Those interested in helping to make puppets for the parade have been invited to stop by the gallery on Monday.

Following the parade, there was a variety of musical acts beginning at 6 p.m. Food stands will be open, and new performances begin on the hour. The last performance starts at 9 p.m.

Musical entertainment continued throughout Saturday, with new performers taking the stage at the top of each hour. Massek takes the stage at 4 p.m.; Kahn is to appear at 8 p.m.

There was also community workshops on various topics such as beekeeping, songwriting, edible weeds, soap-making and recycling. Those are taking place throughout the day at The Coney, Spaghetti Benders, the Brown Hotel and outside at the festival site.

In addition, a children’s area being called Kids’ Alley was set up. It will featured games, music and arts and crafts.

For more information, or for a complete schedule of events, log on to northernappfolkfest.org.

Disclaimer: Copyright © 2013 Indiana Gazette. All rights reserved. This material may not be published, broadcast, rewritten or redistributed.
http://www.indianagazette.com/news/indiana-news/folk-festival-opening-thursday-in-indiana,18103942/

Thanks to Evergreen Boys and Girls Club of Indiana County for sponsoring Kids Alley, 2013 with activities for little folks all day, Saturday, 9/6!